And also, I was happy to see Andy Murray carrying the British flag, but there’s a bit of gloom about it too, because you have to wonder what flag he’s going to be walking in under in Japan in four years time(won’t be the Scottish one; I don’t think they could get an NOC together in time, but it might be the Olympic flag).
Meanwhile, Koreans are scarily good at archery, but we already knew that one, and the bicycle race went a bit crazy. So just your typical Olympics really. So far.

This year, having endured a week and a day of metro track work extending my commute by half an hour in the morning and much more in the evenings, on hearing it was still going on this Monday decided I would take the afternoon off and go with my sister to the Citi Open, to at least escape half the ordeal.  When we agreed on this, there were storms predicted for today, with some chance they would hit yesterday instead.  But if one wants to go on a certain day, one will always subject oneself to the weather of that day.

END_OF_DOCUMENT_TOKEN_TO_BE_REPLACED

Is the time to win it, in our day and age, inevitably when Rafael Nadal is injured?  It was the knees, after all, that were no doubt crucial in that famous fall to Robin Soderling in 2009, which of course gave Roger Federer his.  Yeah, Novak Djokovic has shown the ability to beat him at Roland Garros, but beating him and then winning the final is another matter.  Much easier to win the French Open when he doesn’t have to do both.  It’s definitely looking like this is the year, especially with Roger out already and Andy Murray having two five-setters already-even if he fixes whatever caused those quick, there’ll still be the physical toll they took.  Not the way he wanted to win it, but it may be the only one, plain and simple.  Just remember there’s no such thing as asterisks.  Also that Rafael Nadal will still fight to come back from injuries as long as he’s able.   This is sad, but I still don’t think he’s won his last slam.

I wish I could say the same about Roger.  Hell, I’m not sure about Murray.  Yeah, he’s winning clay masters now, but that’s always been what he’s done, won masters and then faltered at slams.  His ability to beat Djokovic at them, even when it’s fled, has never been far away.  Of course, it’s not like either man needs to win any more slams, but until either Rafa’s playing better, or a few more of these young up and comers have reached the level of our old Big Four, you’d like them to stay in play.

I also wish I could say I’m certain Maria Sharapova is innocent of any intentional wrongdoing.  But with all these claims going around about the Russians, and now the blatant disrespect they displayed of saying she’s going to be on the team from the start, even before they really started talking about forgiving everyone who tested positive for meldonium in January…just leaves a bad taste in the mouth. 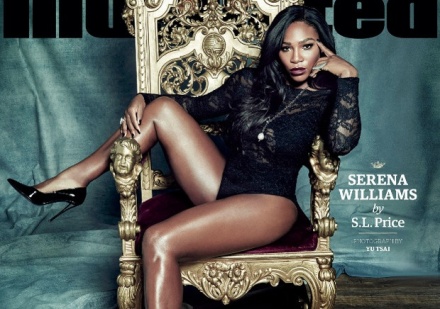 Sportsperson of the Year.

And well deserved.  Seriously, people actually wanted a horse chosen over her?!

One question, though.  What happens if she actually does go and win the golden slam next year?  Does Sports Illustrated ever give this title to anyone for two years in a row?

At this time yesterday, was anybody really looking forward to the ladies final of the US Open anymore?  Had anybody really even comprehended that Serena had went and lost a match she absolutely was not supposed to lose?  You don’t want to go using the word destiny lightly, but after she had to block her own sister’s resurgence, you felt, well, she’d done that big dramatic win, and the only top player left by then was Halep.  The story is not supposed to end in an anti-climatic loss to an Italian player who isn’t even seeded.  It hurt especially because she got so close, and we had all the time to get excited, and become utterly convinced that yes, she’s actually going to do this.  And then she didn’t.  Talk about a bummer.

And yet…out of it we got today.  Once we looked past the crushing disappointment of Serena not being destined for the grand slam after all, we saw an incredible sight.  Not even just two players beating the odds to get to the final, but two Italian girls who came from the same place, shared their own bond-eventually the word sister would once again be used, even if there wasn’t any blood relations involved this time.  And they went out, and they played, and then the winner claimed her own destiny, even more so, as she promptly announced her retirement too.  And there was even another sisterly hug at the net.  Flavia Pennetta might not have been the story we were demanding.  It certainly wasn’t the story we expected.  And yet, in its way, it’s just as wonderful a one as Serena’s grand slam would’ve been.  She even got Serena tweeting about her.

But even then…no doubt had Serena done it, the first commercial after the final was done would have been one of her many sponsors airing a spot congratulating her.  But instead, it was a commercial of her, looking like she’d just come off a lost, going for a run while listening to a song about rising up again.  And Novak Djokovic said it after his own semi-final last night: she’ll be favored once again to do it next year.  We don’t know how many more years at the top she really has left in her, but it’s hard to believe she’ll decline that soon.  And next year there’ll even be an Olympics, so we could potentially be looking at her truly matching Steffi Graf with a golden calendar slam.  Perhaps destiny was just saving that story for then.

If last night was the last time we see Venus vs. Serena, what was match to end with:

No holds barred, Venus rising to the occasion, and Serena, in the end, finding her way to the finish line again. The Calender Slam getting yet more likely, especially with Petra Kvitova now out today; and with Vika Azarenka going out minutes ago, just about the only player left now with even a prayer of stopping it is Simona Halep. And a sisterly hug at the end.

Also, it’s not news the cops are racist, and nor is it news that James Blake is a man with a lot of class.  But…yeah.

My sister and I went to the Citi Open Wednesday, getting our tickets just after Andy Murray was confirmed as playing his first match on that day.  The tournament is pretty familiar stomping ground for us now, but this year the appearance of one of the Big Four brought about huge crowds beyond what the tournament usually sees on a weekday.  Although Murray was hardly the big name in the field, although he was the biggest; DC was also a stop on Lleyton Hewitt’s farewell tour, and while Viktoria Azarenka had to pull out, Samantha Stosur is currently having quite a run in the women’s field.

END_OF_DOCUMENT_TOKEN_TO_BE_REPLACED

I must say, as well as all its other benefits, it’s nice that moving the tournament back a week means that here in the States, we have a national holiday taking place when ESPN is still showing Wimbledon the entire day.  Since it seems there will never again be a People’s Sunday, we need all the days off from work in which we can actually watch live that we can get.

Although at least they had the sense to use the roof today, and make sure everything was done in time for the big day of tennis Monday.  Still, one did worry about if the gambit failed to get the match completed before curfew, and we instead had Gael Monfils and Gilles Simon coming out to play two games Monday instead(and when Monfils would’ve thrived on a People’s Sunday too, I bet).  Quite frankly it was a relief when Simon didn’t have much trouble with the last set.

Today was definitely an odd one, in ways.  Petra Kvitova going out even felt more of a shock than Rafa Nadal had Thursday; after he went down at the French, one almost feels like anything could happen to poor Rafa anyway.  A bizarre episode involving medical timeouts begs the question as to whether it is proper to give someone who’s thrown you off with a medical timeout a taste of his own medicine, or, if that was not Andy Murray’s motivation, just how alarmed we should be about these back/shoulder issues.  And James Ward losing, though it was a match that didn’t draw the attention or drama of Serena and Heather Watson yesterday, is kind of more heartbreaking than the latter.  After all, Heather is still on the up, and did we really want her triumph to come at the expense of Serena’s possible calender slam, and a good all-Williams grass battle?  But who knows if James Ward will ever again get anywhere near the chance he couldn’t grab today, and when the matchup he would’ve prevented would’ve been no great loss(seriously, why couldn’t Dustin Brown had followed up?  I want more of that guy); hey, we might have even seen an all-British quarterfinal!(talk about the crowds going crazy…).

And now the question is, do we dare start believing in Madison Keys now?  Or will she now get overhyped and then crash and burn, just like every other young North American woman who has shown promise recently?

Jeremys Ten and Abbott.  Haven’t seen anything skates from Canadian Nationals yet, but really happy to see the former in position to make it back to Worlds.  Although I’m more worried about the latter.  His short programs were well enough in 2011 and 2013 too, after all, and I would be a lot happier if he’d built up a real margin for error.  Still find it a little strange they he didn’t break 90, honestly, though as I accidentally slept through the kids’ shorts I can’t judge whether they deserve to be ahead of him or not.

Adam Rippon.  Though again, we’ll have to see if he holds it up in the long.

Ashley Wagner.  I’m not entirely sure she deserved the 72, but I ain’t complaining, and her short was good to watch for more than one reason.

Kaitlin Hawayek & Jean-Luc Baker, for their skating this time.

The US tennis ladies.  Four into the Round of 16!  Watched Madison Keys win this morning, and she did lose quite a few service games, but she certainly did a better job serving it out than Ferrer across the way!

The Intermediate Ladies, especially the top two, who would’ve won the men’s competition too!

Any junior dance team who managed to fashion a short dance this year without falling back on Shakira!

Emily Chan, and Caitlin Fields & Ernie Utah Stevens.  Fields especially has taken a big step up. And Caroline and Gordon Green, though I’ve only seen their pattern dances.

Kaitlin Hawayek & Jean-Luc Baker.  Finally gave in and watched them lip sync to the Black-Eyed Peas, and that was something.  Kind of still amazed the USFSA actually uploaded that.(I still really want both the Shibs and Hubbell & Donohue to make Worlds, though, so guess I can’t cheer for them this year).

Thanasi Kokkinakis.  Though maybe it’s more I’m grateful to him for getting rid of Gulbis.