Of course today there was a good deal of news for geeks to go a little nuts over(are we sure Comic Con doesn’t start for two more days?  At this rate we’ll all be too exhausted for whatever news gets announced then!).  But then again, the announcement of the young Han Solo movie isn’t really that much of a stunner; there were words or at least speculation on that one from the moment Disney mentioned they’d be doing one-shot movies as well as a new trilogy.  Glad to hear the directors of The Lego Movie are taking it on; it’s always good when the directors on tap have a really good movie in their recent history, even if the subject matters might differ in various ways.  Also, we of course already knew Elektra Natchios was going to be on the second season of Daredevil thanks to leaked audition scripts, although again the news today is good: from everything I’m hearing about the casting of Elodie Yung it seems she’d be absolutely perfect for the role were she Greek, and as it is remains a pretty excellent choice(they spoke of looking worldwide.  I would hope at least some Greek actresses read for the part).

And I suppose, when it comes down to it, the photographs posted yesterday by the lovely and amazing Shelly Kay don’t really reveal much about the series either.  But they’re new shots of Matt and Foggy.  With Matt holding onto Foggy’s arm, even though Foggy now knows he doesn’t actually have to.

Unfortunately the better picture of this one that makes clear they’re walking wasn’t downloadable. Seriously, everyone, give a photographer credit for her photos so she won’t have to do that

Seriously, the bromance of it all: 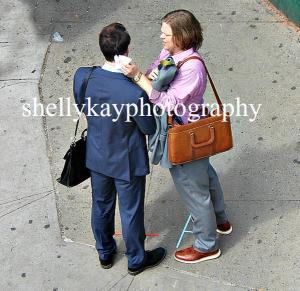 What are they doing here? Who knows? Who cares?

Okay, maybe I’m getting a little overexcited(seriously, this show has made me feel like a teenage fangirl again).  But I can’t wait to see this scene on my computer screen.  Also, it’s kind of fascinating to see them out on the street, and all the marks they have in place for Charlie and Elden to stand at.

Speaking of photographs on Twitter, this sort of thing may be inevitable now, but I still love it.

Finished Daredevil just after breakfast yesterday, and spent the rest of the morning consuming the fandom that has sprung up around it, before going off to watch the Met Opera’s broadcast of Cavalleria Rusticana/I Pagliacci.  It was a very Catholic day.  Most of it was made pretty much by virtuoso performances.